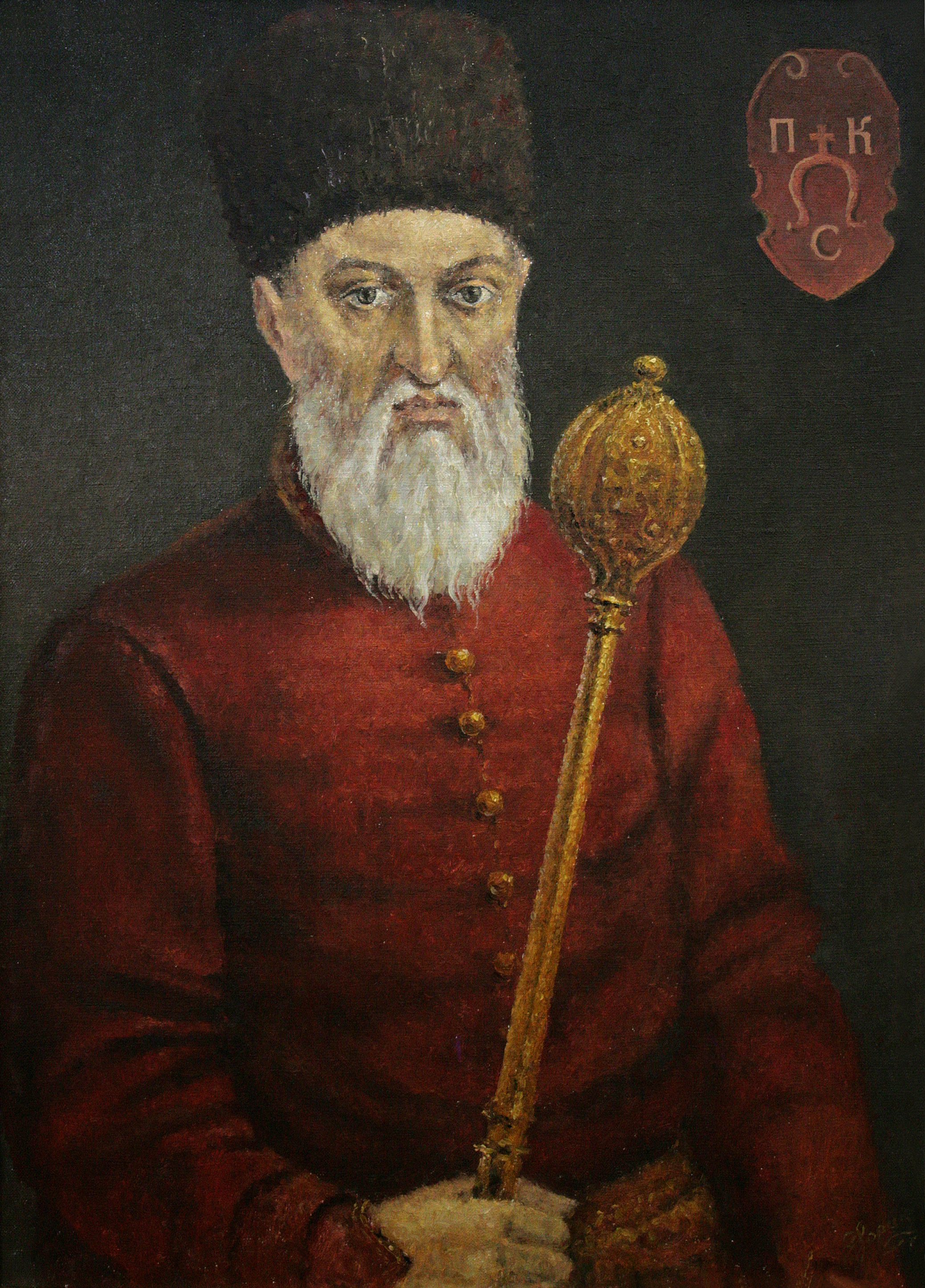 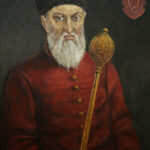 Konashevych, Sahaidachnyi Petro Kononovych, from the coat of arms of Pobuh (about 1570, 1577 or 1578, Kulchytsi village, Sambir district of Rus Voivodship, today Sambir district of Lviv oblast — 10 Apr 1622, Kyiv) — military leader, political figure, Hetman of the Zaporizhian Army, one of the founders of Kyiv Brotherhood and Kyiv Brotherhood School, its patron and philanthropist.

He came from the noble Orthodox ancestry of Konashevych-Popel. It is likely that future Hetman was nicknamed Sahaidachnyi in Sich. In 1592-1598 he studied at Ostroh School, after which he moved to Kyiv. In the end of the 1590s, he joined the Zaporizhian Army. In 1616 he was elected Hetman of the Zaporizhian Army and held a series of successful military campaigns while leading it.

In 1620 he was one of the initiators and organizers of the restoration of the Orthodox hierarchy of the Kyivan Metropolitanate, since after 1596 there was no Orthodox bishopric as a result of the Brest Union. The first ordination of the Orthodox hierarchs, including Job Boretsky, Isaiah Kopynsky, Meletiy Smotrytskyi, and others, was secretly held in October 1620 in the Epiphany Church of Kyiv Bratsky Monastery under the protection of the Cossack army.

The consecration was conducted by Patriarch of Jerusalem Theophanes III who granted the patriarchal charter with the right to stavropigia to Kyiv Brotherhood, that is, the direct submission to the patriarch.
In 1620 P. Sahaidachnyi joined Kyiv Brotherhood with all the Zaporizhian Army, providing protection to the brotherhood, monastery, and school, and supporting them in the situation of the confessional rivalry.

In the middle of 1620, the first church of the Epiphany was built on the territory of Bratsky Monastery at the expense of Sahaidachnyi. According to Sahaidachnyi’s will, all his funds were granted to Kyiv, Lutsk, and Lviv Brotherhood Schools. P. Sahaidachnyi was buried in the Church of Kyiv Brotherhood Epiphany Monastery built by him, to which he commissioned a silver cross with gilding.

During the funeral, the students of Kyiv Brotherhood School read the poems dedicated to this event: Virshi na Zhalosnyi Pohreb Zatsnoho Rycera Petra Konashevycha Sahaidachnoho [Poems for the Mournful Funeral of the Honorable Knight Petro Konashevych Sahaidachnyi], written by the Rector of the School, Kasiyan Sakovych, who praised the feats of the Ukrainian commander and his ministry to the Christian faith.