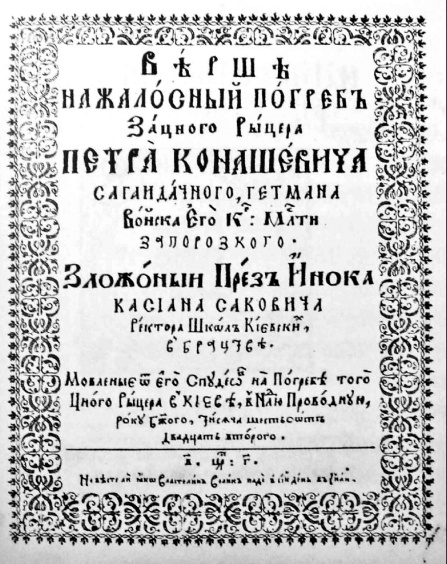 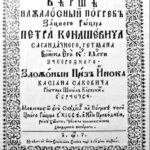 Sakovych Callist from the coat of arms of Corvin, the monastic name Kasiyan (1578, the town of Potelych of the Belz Voivodship, today: the village of Zhovkivsky district, Lviv oblast — 1647, Krakow) — the third Rector of Kyiv Brotherhood School, writer, preacher. The descendant of the Ruthenian boyar ancestry named Sakovych. Studied at Zamoysky and Krakow Academies. In 1620 he came from Przemysl to Kyiv and took monastic vows here. It is likely that he was a teacher in the family of the future Kyiv Governor Adam Kysil. While running Kyiv Brotherhood School in 1620-1624, he also taught poetics, rhetoric, and philosophy at school. He was one of the most educated figures of Kyiv Brotherhood School, who contributed to its strengthening and development. In 1624 — early 1625 he moved to Lublin, where he headed the Orthodox brotherhood. In 1625 he accepted the Union and became the archimandrite of the Dubniv Holy Transfiguration Monastery in Volyn. Becoming a catholic in 1641, he actively spoke as a polemicist against Orthodoxy.

Kasiyan Sakovych is the author of two works: Aristoteles problemata, albo Pytania o przyrodzeniu człoveczym [Aristotelian Problems, or Questions about the Nature of Man], Krakow, 1620, and Traktat o duszy [The Treatise on the Soul], Krakow, 1625. The works written during the rector’s practice at Kyiv Brotherhood School have a structure similar to the textbooks and, according to the author, at the beginning of the Traktat o duszy, the Polish edition originally was written in another language. It is likely that these works were originally lecture courses written in the Old Ukrainian language, and were taught to the students of Kyiv Brotherhood School. In addition to Sakovych’s pseudo-Aristotelian apocryphal text, the work Aristoteles problemata, albo Pytania o przyrodzeniu człoveczym also contains samples of the oratorical art as teaching material on rhetoric. The central ideas of the text are as follow: the human, the problems of Man’s self-cognition, the ability to control one’s emotions, mind and actions through self-study and education.

In 1620 Sakovych was present in the Epiphany Church of Kyiv Brotherhood Monastery when Patriarch of Jerusalem Theophanes III conducted the consecration of the Orthodox hierarchs with the support of Hetman Petro Sahaidachnyi and the Zaporizhian Army. He is the author of a well-known work Virshi na Zhalosnyi Pohreb Zatsnoho Rycera Petra Konashevycha Sahaidachnoho [Poems for the Mournful Funeral of the Honorable Knight Petro Konashevych Sahaidachnyi] written on the occasion of the death of Hetman in April 1622 in Kyiv. Twenty students of Kyiv Brotherhood School read those poems during the funeral ceremony. Soon, this composition, supplemented by the description of the emblem of the Zaporizhian Army, a preface, and an appeal Do Chytelnyka [To the Reader], was published as a separate book in Kyiv-Pechersk Lavra.